skip to main | skip to sidebar

Music for a Hawaiian holiday season

Thought I'd share with you a few ideas for Christmas music - island style! Bring the spirit of the islands to your home and holiday parties or give as gifts to your friends and family. 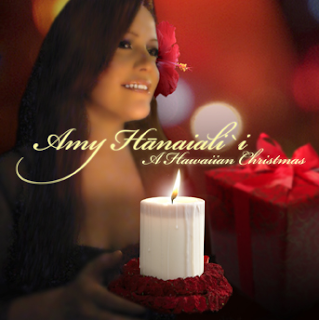 Guest artist at last year's Slack Key Festival, two-time GRAMMY® nominated Amy Hānaiali`i gracefully wraps it up in red and green with A Hawaiian Christmas. Featuring songs beautifully arranged by Jeff Peterson, Amy's first Christmas CD takes you back to the simple days in the islands, when holidays were all about family and friends. Invite Amy Hānaiali`i to share her holiday memories with your `ohana (family) this Christmas. 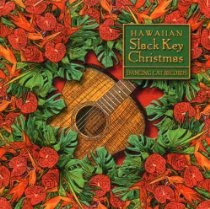 Great stuff on this here Hawaiian Slack Key Christmas CD including Keola Beamer's version of Away in a Manger and Bob Brozman tearing things up with Ledward Kaapana on Jingle Bells. Joanie Komatsu, one of my all-time favorite island entertainers, performs O Holy Night with her sister Ruth playing recorder; as a kid, Ruth was a huge influence on me and is, without a doubt, one of the reasons why I got into music in the first place. Both Keola and Bob will be appearing for the first time at the Festival this January! 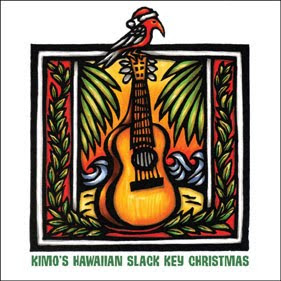 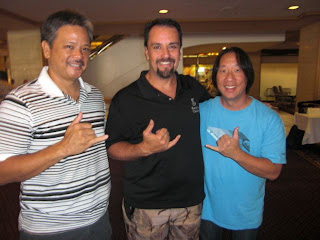 I recently visited Hawaii and had the opportunity to attend the 9th Annual Ukulele Guild of Hawaii Exhibition & Conference which was held this year at the Princess Kaiulani Hotel in Waikiki. Many thanks to Bryan Tolentino (photo left to right: Bryan, Joe Souza of Kanile'a Ukulele, and me) for letting me know about this event and introducing me to Kimo Hussey, Kamuela Kimokeo and the Guild folks - it was a good hang! Got there during Dickie Boy Cantohos' set and thoroughly enjoyed his playing - a nice combination of seamless strumming and melodic plucking that felt very Hawaiian-style to me. Bryan calls it "non-confrontational" because it's not flashy (doesn't have to be) but impressive all the same. 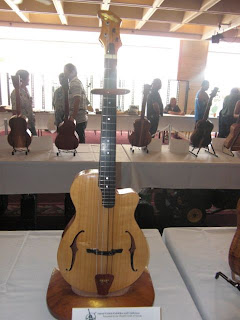 I really enjoy listening to Bryan's style of playing - in fact he's one of my favorites. Very tasteful and mindful of those he is accompanying, a real team player. You can catch him Tuesday nights with Weldon Kekauoha at the new Kani Ka Pila Grille at the Outrigger Reef on the Beach at the beginning of Waikiki, near Fort Derussy. Be sure to check him out live when you have the chance! You can also pick up a copy of his solo CD here. 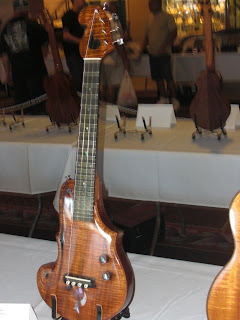 So anyway, there were lots of great looking ukulele there, although since you weren't supposed to touch 'em, I couldn't tell you how they sound. Bryan tells me he used to be a board member of the guild and always strived to strike the right balance between instruments that looked great and instruments that looked AND sounded great, which is not always the case. Here's a couple of photos of the ukes they had on display, you can see more here.

It was a nice event, one they are still working to expand on. I only saw the exhibition part but they offered ukulele building and playing seminars as well. I wish them continued success and hope to have the opportunity to help promote the annual event.
Posted by Mitch Chang at 8:03 AM 1 comment:

Ukulele: B-flat and other "movable chords" 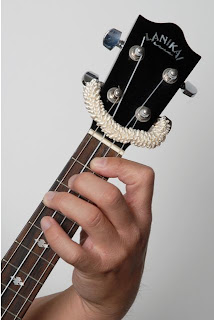 I recently posted a new video on Youtube explaining how to play a song by Never Shout Never called First Dance. I show two ways to play it: using the chords in the original key of the song followed by how to play those chords in the correct positions on the neck so it sounds exactly the way you hear it on the recording.

1) Using the actual chords in the key the song was recorded in is important if you want to play along with the CD. I always recommend doing this because it will really improve your rhythm and timing and it's fun because you feel like you have your own backup band!

2) Using a movable chord shape based on the B-flat chord (shown in the picture) - great thing about this is you can take just one chord shape and play entire songs by just shifting it up and down the ukulele neck.

For example, a song with the chords F, B-flat and C can be played with this chord shape at the 8th, 1st and 3rd frets respectively. Similarly, a song with the chords G, C and D can be played with the same chord shape at the 10th, 3rd and 5th frets. Notice how the chord is named after the note you're covering on the top/1st/A string. Consult the fretboard diagram I handed out in class to see those notes. If you don't have a diagram, email me and I'll send it to you.

Lots of rock songs like You Really Got Me, Anarchy in the UK, Jessie's Girl, etc, were written on the guitar using this concept of movable chords.

Check out the video and let me know what you think by leaving a comment on the page below it. Also, be sure to become a subscriber to my channel if you're not already, so you can be updated whenever I upload new lessons.
Posted by Mitch Chang at 10:53 AM No comments: 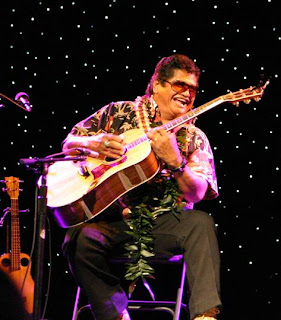 Ledʼs mastery of stringed instruments, particularly slack key guitar, and his extraordinary baritone and leo ki`eki`e (falsetto) voices, have made him a musical legend. Thrilling audiences for more than 40 years with his easy-going style and kolohe (rascal) charm, Led has built a loyal corps of Led Heads from Brussels to his birthplace on the Big Island of Hawaii.

Recognition by his peers earned Led Grammy nominations in 2006, 2007 and 2009 and he has collaborated onstage with a dazzling list of musicians including Alison Krauss, Sonny Landreth, Chet Atkins, Leo Kotke, Taj Mahal, Ry Cooder and Tal Farlow to name a few. Ledʼs fret board technique and soaring vocals are unforgettable.

A few days ago I received my copy of Ki Ho'alu: Slack Key The Hawaiian Way, a DVD documentary of Hawaiian slack key guitar, Hawaii's gorgeous, indigenous fingerpicking guitar style. I've really been enjoying it! You'll recognize some of the names and faces that have appeared at the Southern California Slack Key Festival like George Kahumoku Jr, Ledward Kaapana and Dennis Kamakahi. Gary Haleamau, who was a part of the 2008 Aloha Falsetto Festival, is also in there and you'll get to see him again at the 2011 Slack Key Festival in Redondo Beach January 23. Lots of great interviews and music from Gabby Pahinui (Cyril's father), Raymond Kane, George Kuo, and even my UH college professor Lisa Smith!

I never would have thought - back when I was attending the Slack Key Festival in Hawaii (when it used to be held at the McCoy Pavilion at Ala Moana park) - that I'd be hiring these people for my shows and becoming friends with them.

This film premiered at the Kennedy Center in Washington D.C., during a special day of screenings at the American Film Institute honoring Eddie Kamae's Legacy Series. Jim "Kimo" West says he was there on Maui back when they had just wrapped up the filming and remembers them partying it up at the local restaurant/bar. Lots of great playing techniques that you just don't see anymore like the sewing needle hanging from the mouth and banging up against the string and right hand tapping. I'm sure you'll enjoy this documentary as much as I am.
Posted by Mitch Chang at 11:51 PM No comments:

An Ukulele Wedding In SoCal

Summer is definitely getting into high gear - I can tell from all the fun party and wedding events I've been playing for!

This past weekend I was hired for another summer wedding event - this time, ukulele-only music was requested for the ceremony. The bride was actually someone I met through the new ukulele class I started on Mondays at the South Bay Adult School and she had some special requests like my What A Wonderful World for the bridesmaids, Pua Lililehua for the Processional, and since the groom's parents are from England, my arrangement of Here Comes The Sun for the Recessional. You know, given his love for the instrument, I wouldn't be surprised to learn that George Harrison wrote the song on an ukulele. Here's a fun video of George with his uke, hanging with Ringo and Sir Paul.

Got a few more ukulele weddings happening this summer so I'll have a chance to whip out some new arrangements of I'm Yours, Summertime, Sway, Top Of The World and some other fun stuff I've been working on.
Posted by Mitch Chang at 1:40 AM No comments: 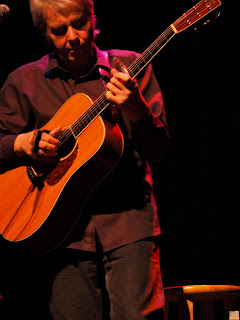 With five critically acclaimed albums to his credit and numerous awards, Nick is an artist who is in high demand for concert appearances and workshops.

"The best picker on the scene"
- Artstreams Magazine

Nick has been a performing and touring acoustic musician for over 25 years on the Australian and international acoustic music scene. Averaging over 200 shows a year from Perth to Sydney and LA to Kansas City - including many major guitar, folk, blues and jazz festivals - the eclectic nature of Nick's music continues to delight and captivate his audiences. With five critically acclaimed albums to his credit and numerous awards, Nick is an artist who is in high demand for concert appearances and workshops. His musical influences are many and varied and include the seminal blues of Big Bill Broonzy and Blind Blake, the countrified picking of Doc Watson and Merle Travis and the infectious swing and melody of Django.

The prestigious Melbourne newspaper, "The Age", has declared him "Australia's virtuoso of acoustic roots guitar" and Artstreams Magazine states emphatically he is " the best picker on the scene".

For Email Marketing you can trust

Mitch Chang
Redondo Beach, CA, United States
Producer and Promoter of the Southern California Slack Key Festival and the Los Angeles Flamenco Festival in beautiful and sunny Redondo Beach, California. Born and raised in Honolulu, music major grad from University of Hawaii now living in the South Bay of Los Angeles. Member of the Redondo Beach Chamber of Commerce and Visitors Bureau, I teach and play guitar and ukulele around town, visit my new ukulele instructional website at www.UkuleleWebsite.com.